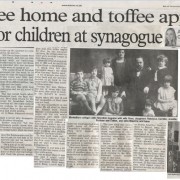 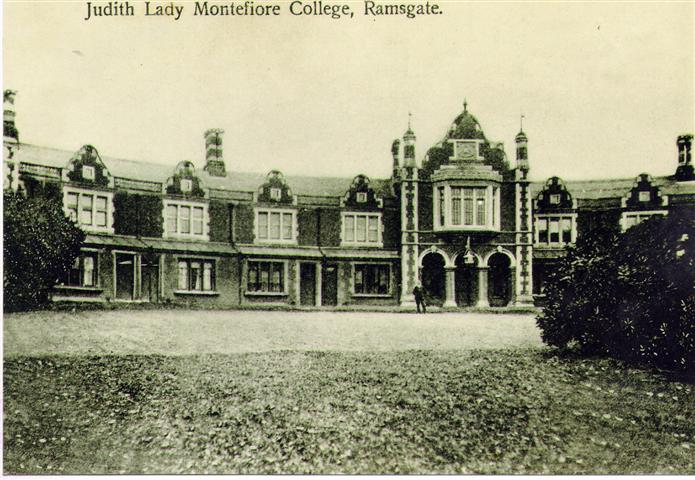 The Montefiore College and Synagogue have been a part of Ramsgate history for more than 150 years, ever since Moses Montefiore had the foundation stone laid in 1831.

The synagogue was dedicated and opened on 16th July, 1833 and has continued to serve the Thanet Jewish community ever since.

This picture from Esther King of Ramsgate, shows Esther’s father Shemtob Gaguine, who was a Rabbi of the college, with her mother Rosa, sisters Rebecca, Camille, Janette and Fortune and brothers Maurice and Isaac, with Esther the small girl sitting on the floor. It was taken in 1926, when Esther was five.

The Gaguines had moved from Palestine in 1920 so Shemtob could take up a post in Manchester. Five years later he became the principal of the Montefiore College and the whole family moved into the grounds.

Esther said: “On each side of the college there were five houses with five families living there rent-free, with all the bills paid and with a small allowance given to them for their families.

These men had to come to all the services in return. Each service needs 10 men to make up the quorum to complete the service.”

All the college houses were quite small, just two-up-two down with no bathroom. Father had to have two houses knocked into one because there were so many of us.

The authorities in London arranged for the work to be done so that we had a bigger living room and four bedrooms, one for mum and dad, then three girls together two girls and two boys. It was just fine with four bedrooms and we all loved it there.

The day would begin when Shemtob took the 8am service. He’d then return to the house for breakfast before meeting all the other men of the college in the reading room at 9am to discuss religion and world events.

At 11:30am Shemtob would take a stroll into Ramsgate to do some shopping.

Esther recalled: “All the people knew him, I’d go with him and I would be so embarrassed when we went into the fishmongers and he would ask for the fish to be filleted but say he wanted the head for the cat. We’d also go the greengrocers twice a week. Dad would get this huge load of fruit and vegetables and then the grocer would give him five toffee apples for free, for the youngest children. He always said “The older girls would not want to ruin their teeth.”

Shemtob retired as principal in 1950 and he and Rosa moved back to Manchester.

“I think they felt that Ramsgate wasn’t the same after the war,” Esther said. “A lot of people just didn’t come back and my parents decided to go back to the community that they knew in Manchester.” During the war Esther was one of those who left the area. She went to work in the NAFFI in north Wales when she was 18 and her memories of that time are not fond.

“It was somewhere in the wilds and we all slept in these big Nissan huts, Royal Marine commandos would come out for six weeks training and then they would be off again. I used to serve teas and coffees at first, but I couldn’t see over the counter, being only little, so I ended up doing the staff cooking and making cakes for the lads to buy. It was hard work and I hated every minute. It was the first time I had left home and we were a very close and loving family. I missed it and was upset by the way some of the other girls acted. I was so glad when it was over and could come home.”

In 1950 Esther married Merchant Navy man Laurie King. Laurie was a baker by trade and had even made some of Winston Churchill’s birthday cakes when he’d worked in London.

Esther and Laurie stayed in Ramsgate and Esther decided to go into business by opening up a textiles shop in Chatham Street. Two years later she managed to persuade the tenants of another shop in the same street to sell her their lease. Esther a shrewd business-woman, beat them down from a price of £4,000 to £1,200. The new shop was called Fabrix and Esther traded there for more than 20 years, expanding to add a bridal section upstairs that provided everything from materials to flowers and coronets.

Esther and Laurie didn’t have children but Esther says she put her heart and soul into the business until retiring in the 1970’s. Husband Laurie passed away at this time.

The Rabbi’s family eventually became spread around all parts of the world with only Esther remaining in Ramsgate. Rebecca moved to South America, Camille went to Egypt, Isaac died during the war, Maurice became a Rabbi, Fortune emigrated to Australia and Janette moved to Cheshire.

If you have any photos or memories regarding the Judith Lady Montefiore College that you are willing to share with us, please contact the Friends of Montefiore Woodland : montefiorewoodland@gmail.com