Parakeet had another brood in same nest hole.

Several nest-boxes in use by tits. 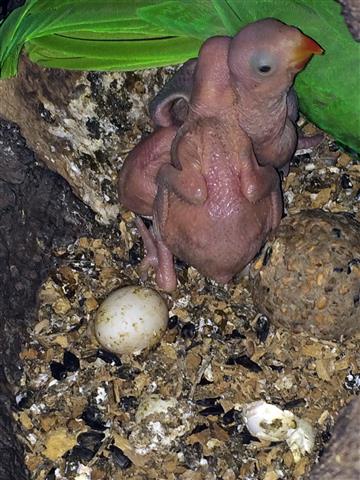 A pair of Parakeets occupied a woodpecker’s nest hole within the woodland again this year. I took weekly photos of developments. Some of which I uploaded to Flicker and made be viewed by clicking on the following link:

Some additional sponsored nest boxes to be erected during forthcoming work parties.

Ring-necked Parakeet  – nesting in hollow of tree, chick within – heard calling. May 2015.

Blue tit occupied and successfully reared within PJ box in Holly tree adjacent to the clearing for the third year.

Blue tit occupied and successfully reared within PJ box in Holly tree adjacent to the clearing both last and this year (2013).

During a work party (Sunday 27th January) these boxes were attached to trees in various locations within the woodland. (Our thanks to Russell and Mike for the ladder work).

The boxes are numbered 1-5 and an original box from the previous Montefiore Action Project (Map 1) was repaired and returned to the site.

During the coming weeks, these boxes will be monitored and activity recorded accordingly and results will eventually be uploaded to this page.
Incidentally within half an hour of erection, Box 4 was prospected by an interested Blue-tit!    Watch this space……!

A Stock Dove roosted within a box but sadly no further interest.

John regularly visited the woodland to observe which birds were present and to record the birds breeding in the vicinity.