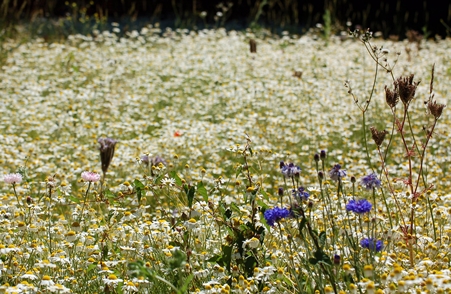 Montefiore Woodland contains both native and introduced flowering plants.
In some winters here, the vanilla-scented Winter Heliotrope which itself is widespread by this time may be seen flowering in late January or early February on a path leading from the meadow.

Alexanders, once a Roman pot herb is widespread by April, its greenish-yellow heads looking a little like cow parsley, which itself id widespread by this time. Other spring flowers are Lesser Celandine near the entrance on to Dumpton Park Drive and Common Dog Violet and Slender Speedwell along the path to the Synagogue by the wall.

Early summer will bring the most flowers in the seeded meadow (sown 2013) where you may find Scentless Mayweed, Common Poppy, Scorpionweed, Californian Poppy, Corn­flower and the rare Corncockle amongst many others.

Scattered in the woodland is Foetid Iris, a native yellow brown or purple flower tolerant of deep shade, look between May and July and in autumn for its bright red berry fruits. Dog Rose blooms in June at the edge of the meadow. Look also in late summer for the Prickly Lettuce, or Compass Plant whose leaves point north and south in full sun, they are on the edge between the meadow and the wood.

Two widespread species, sometimes considered problematical by conservation­ists are Blackberry and Ivy. However, these provide nesting cover and security for small mammals and birds, nectar sources for a large variety of insects and in the case of Ivy, late flowering when many other species are dead and fruits in winter when sometimes other food sources are scarce, so there needs to be space for all, even if some of the very aggressive species need to be kept in check.

We have only a very small space for so many needs after all!

NB Corn Cockle: A most interesting observation seen in meadow from 21st July, 2013 in small numbers. Formerly a widespread cornfield “weed”. Declined dramatically in the 20th Century with improved seed cleaning. An ancient introduction, probably from the Eastern Mediterranean with the spread of cultivation  into Temperate Europe from 2500 BC onwards. Now almost extinct in Britain, but occurs in Ranscombe Farm, Cuxton. First record in Kent dates from 1629. Now a component of wildflower seed mixtures, but not given in list of species in the meadow seed mix broadcast at Montefiore Woodland in the spring of 2013. origin uncertain.

Trees and shrubs shown as present in 2012 list and still extant in 2013 (not included in this list).

Our thanks to Peter for his time and effort!