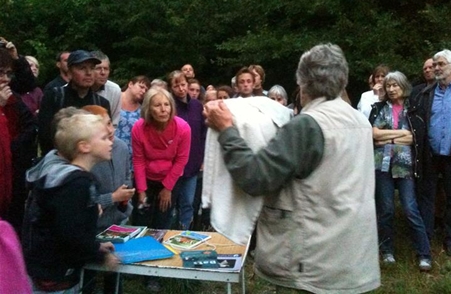 Following a successful Moth Evening and Bat Walk in August 2013, the committee decided to purchase three Bat Detectors for the Woodland group so we could hold further summer Twilight Bat Walks to and from King George VI Park and around Montefiore Woodland itself. (The walks were held one evening at the end of each month – June at 9pm, July at 8:30pm and August at 8pm. It was agreed we would report any sightings to the Bat Conservation Trust as part of their national sunrise/sunset survey.

Once again, these walks have been popular and well-attended.

Blessed with ideal weather, much to the delight of everyone, we were all able to see and hear (via the Bat Detectors) between seven and twelve different Common Pipistrelles on the wing as they were hunting their insect prey in our local area. Bat calls are normally beyond the range of human hearing and are used to build up a sound picture of their surroundings thus enabling them to wing their way through the dark night hunting the tiniest of insects, but with the aid of the detectors we were all able to spot these delightful, mysterious, nocturnal creatures.