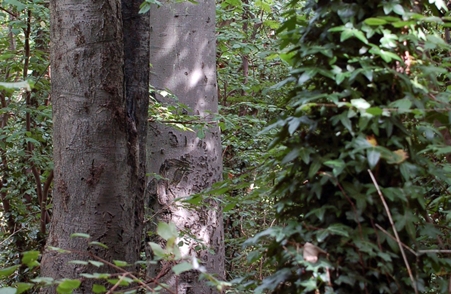 Why do we cut down trees to help wildlife?

As far as woods go, it turns out that some human intervention is actually good for wildlife. For thousands of years people across the British Isles have cut down trees for fuel, building and making useful things like furniture. Plenty of plants and animals rely on sections of woodland being cut down every so often as more sunlight can reach the forest floor.

A healthy wood is a much more complicated habitat than you might think. It has layers. At the top is the canopy layer, which includes Ash, Hornbeam and Beech in this wood. Next down come the shrubs and smaller trees – look out for Field Maple, Hawthorn and Elder. Then, below the trees are the scrub, field and ground layers. Keeping the canopy open lets light through to lower levels, in turn giving a greater variety of feeding and nesting opportunities for animals.

What gets the chop?

The trees that are first to go tend to be the ones that are not native and are considered ‘weeds’. These are the trees that spread and grow quickly, like Sycamore and Evergreen Oak, out-competing our native species which support a larger variety of insects and other wildlife. Young Elm suckers are also cut down as they won’t survive for long before becoming infected with Dutch Elm Disease.

What kinds of tree can I see?

The trees now standing in Montefiore Wood are here either by accident or design. Many are from natural colonisation – the seeds arriving from trees in the surrounding area – while others were deliberately planted. Most of the species you can see are native or naturalised. Some, however, you won’t see in native woodland – they are exotic species or garden varieties that have been planted here over the years, such as an ornamental oak and Variegated Ivy. We’ve decided to leave these as an acknowledgement of the site’s history as a garden.

Survey carried out by: Sue, Lisa, David, Peter, Michelle, Alan and Mike
(Survey list so far – by no means comprehensive.)