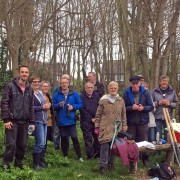 I am very pleased to be able to report on another successful year, the 7th for the Friends of Montefiore Woodland.

Work parties have generally been held on the first Saturday morning of most months throughout the year. This enables us to continue to preserve and improve the area.

We have been very pleased to welcome several new volunteers who have helped in keeping the rampant ivy, alexander and brambles in check. Litter is cleared on a regular basis and the siting and emptying of waste bins is now much less of a problem.

Dave Welch continues to obtain loads of wood chippings, which have been used to very good effect on the pathways.

Dave, Ron and Nick Rankin attended a reception at the Yarrow Hotel in January on behalf of the Friends of Montefiore Woodland. They received a certificate awarded by the Thanet Community Awards “in recognition of outstanding contribution the organisation has made to the community of Thanet.”

The wildflower meadow flourished over the summer months and was cut back in November. Attention has been paid to specific plants in order to restrain the growth of grasses and promote the plants which are most attractive to insects. We are grateful to Peter Atherall for keeping a record of flowers and plants in the woodland. Full details can be seen on the Woodland’s website. Peter was given a much-deserved award from Kent Wildlife for his work on conservation over many years.

Sue Smith has continued her regular butterfly transect over the summer months and her records can also be viewed on the website.

We participated in the National big butterfly count in July when 10 different species were recorded.

Bat walks were held over the summer months attracting a good number of people of all ages.  There were sightings of bats on every occasion. A collection of voluntary contributions enabled us to send a contribution to the Kent Bat Group.  Thanks to Cllr Michelle Fenner’s donation we were able to purchase a Heath Bucket Moth Trap which we set for the first time on the last bat evening, Friday 31st August 2018, 7:30pm – 9:15pm during our Bat Walk .

As the Woodland has free access to the public, the trap was not left unattended, to avoid risk of it being stolen or damaged. On our return to the woodland it was with interest 20 + visitors watched as we opened the trap to see if any moths were within.

The following moths were recorded:

During a recent storm a mature horse chestnut tree was blown over from the Synagogue grounds damaging the boundary wall.  The tree has now been removed and the wall repaired. The sawdust created in the tree removal was a welcome addition to be spread along the path by Dave.

Cllr Michelle Fenner has indicated that she would like to donate £879.25 from her final Ward Funding Pot to Friends of Montefiore Woodland towards the cost of maintaining the flint wall. We express our sincere thanks to Michelle for her continuing support.

I would like to thank Sue Smith and Peter for the excellent job they do in maintaining the website – always a pleasure to browse through it.

I would also remind you that we have a Face book presence, which is useful for sharing information with members and other organisations.