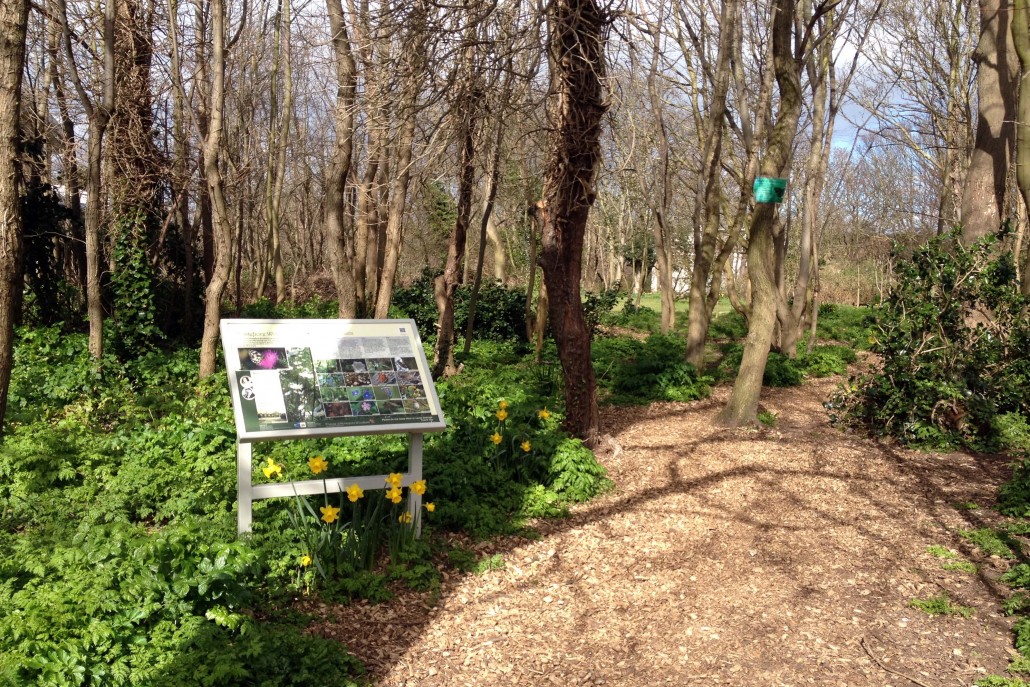 Friends of Montefiore Woodland – 2016 Annual Report from the Committee

I am very pleased to be able to report on another successful year for the Friends of Montefiore Woodland.

Regular work parties have been held throughout the year, which has enabled us to continue to preserve and improve the area.

Numbers attending the work parties have dropped off and we need to recruit more volunteers if we are to keep up standards.

Work has included thinning out sycamore saplings and cutting back or removing brambles and Alexander as well as some of the ivy.  This will allow more diverse species to flourish. Native plants including bluebells, foxgloves, primroses, celandines, daffodils and cowslips have been introduced. Litter is cleared on a regular basis and new waste bins have been installed.

Dave Welch has obtained several loads of wood chippings, which have been used to very good effect on the pathways.

We thank Travis and Perkins for their gift of builders bags which are most useful for clearance work.

It was decided that the fencing around the wildflower meadow be kept in place as the ground was becoming impacted due to over use by some dog walkers. The meadow flourished over the summer months and was cut back in November.  Disappointingly the yellow rattle did not appear but we are hoping that this was due to the previous mild winter. We are grateful to Peter for keeping a record of flowers and plants in the woodland. Full details can be seen on the Woodland website: http://www.montefiorewoodland.org.uk/

Sue Smith does a regular butterfly transect over the summer months and her records can also be viewed on the website.

We participated in the National butterfly count in July when 10 different species were recorded.  Dr Francis Burgess recently donated 6 Purging Buckthorn which have now been planted in an effort to attract Brimstone butterflies. Buckthorn is the sole food plant of the brimstone butterfly which is known for its ability to travel miles to find the bush to lay its eggs on. The reintroduction of the buckthorn bush paid dividends for local brimstones in Suffolk. http://www.bbc.co.uk/blogs/natureuk/2011/07/brimstones-and-buckthorn.shtml

Buckthorn flowers provide nectar which seems particularly attractive to bees and hoverflies. Later in the year, shiny black berries provide a valuable source of food for birds. A number of moth larvae are also occasionally found on these bushes.

Pat and Gerry Short continue to fill up the bird feeders on a regular basis. Requests have been made for contributions towards the cost of bird food on the following lines : £2 will buy 1kg sunflower hearts, ,£2 1kg Niger seeds, £2.50 1kg peanuts and £5 will buy 50 fat balls. We find that some people who are unable to carry out the physical tasks are pleased to show their appreciation in this way.

We participated in the RSPB Big Garden Birdwatch in January when 45 birds of 12 different species were recorded.

Bat walks were held over the summer attracting a good number of people of all ages.  There were sightings of bats on every occasion. A collection of voluntary contributions enabled us to remit £20 to the Kent Bat Group who were very appreciative of our efforts. Again full details can be seen on the Woodland website.

During the year the wall to the back of the Woodland was made secure and shrubs planted in front of it.  Jim Webster did an excellent job of painting over the graffiti.  Council repairs to the flint wall are still outstanding, however, new bins have been erected at both entrances.

I would like to thank Sue Smith and Peter for the excellent job they do in maintaining the website – always a pleasure to browse through it.

I would also remind you that we now have a Face book presence, which is useful for sharing information with members and other organisations.

The committee continues to meet regularly in the Montefiore Arms and we thank them for their hospitality.