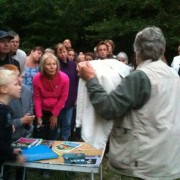 Approximately 70 people of all ages, enjoyed this fascinating evening (which coincided with National Moth Nights 2013) discovering more about these mysterious, nocturnal visitors to our local area, thanks to the knowledge shared by the two visiting specialists Shirley Thompson from Kent Bat Group www.kentbatgroup.org.uk and David Gardner – Butterfly Conservation/Kent Moths www.kentbutterflies.org/

Shirley began our event with a talk and shared many interesting facts about bats living in Kent especially Common Pipistrelle which were later identified as the species residing in the area, thanks to the Bat Detectors she had kindly brought along for the visitors to use during our walk to and from King George VI Park and around Montefiore Woodland itself.

Much to the delight of many, especially the children, she had even brought along a two bats that she is at present rehabilitating!

Bats use high frequency calls normally beyond the range of human hearing to build up a sound picture of their surroundings.  This echolocation system enables them to wing their way through the dark night hunting the tiniest of insects.  A bat detector makes these echolocation calls audible to humans – and because different bat species hunt different prey and are different sizes, they make different calls thus helping to identify them.

During the walk we were all able to hear (via the Bat Detectors) and see at least five different Pipistrelles on the wing as they were hunting their insect prey.

Once we had returned to the Woodland, David Gardner, Moth specialist from Butterfly Conservation had set up his trap. With his UV lights powered by a generator he had brought with him, many moths of all shapes, sizes and colours were being lured towards his trap. David then placed individual moths in a pot and identified them sharing much information about each species, whether they reside locally or are migratory and other interesting facts, at the same time passing them around for visitors to observe at close range. Interestingly, there are 58 species of butterfly to be found within the UK but over 2000 species of moth and some are even more stunning than butterflies!

Many pleasing comments were heard from visitors leaving the woodland and emails sent to: montefiorewoodland@gmail.com including:

“We found the Bat/moth walk & talk on Sat evening fascinating, thank you!”

“The moth expert was a fascinating man who made his subject matter really engaging for the whole family”.

Some of the visitors (many of which had lived in Ramsgate for many years) were completely unaware of this area available for the community to enjoy!

The Friends of Montefiore Woodland would like to thank specialists David and Shirley for kindly supporting this event (free of charge) and helping to make this an interesting and memorable evening!