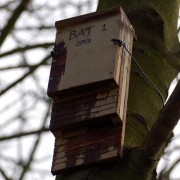 Since the Autumn, occasional work parties have continued to improve the Montefiore Woodland. Footpaths have been better delineated, and bark chippings (a skipful of which were donated by Brazil Brothers, for which many thanks), have begun to be laid along them. Members have sponsored Bird and Bat boxes and these have been installed in various locations throughout the Woodland. Activity in these will be monitored and recorded and eventually uploaded to the ‘Surveys’ section of our website: www.montefiorewoodland.org.uk

The clearing has really opened up since we removed the bramble tops, and now there is the demanding task of removing bramble roots and runners. This could be an on-going battle, but by the time you read this we hope to have had the use of a mini-digger, kindly loaned by Jewsons (Friends of Montefiore Woodland can also get a 50% discount on tool hire from the same firm).

The accumulated leaf litter from many years will have made this top layer very rich, and this will only help to encourage the growth of coarse grass, which could smother the wild flowers. By creating a wildflower meadow we should attract even more butterflies, bees and other insects.

Large amounts of invasive Ivy has been removed from trees along the boundaries and work has also begun on the thinning of the woodland glade, thus opening up the canopy in order to allow light to penetrate, and hopefully encouraging the growth of more varied plant species. This will be a demanding seasonal task in the years to come, but it is our intention to retain and improve this area as a woodland glade. Across the site there has been a fair amount of casual vandalism in the past, with at least two mature trees being set on fire. The charred Holly tree was originally presumed dead, but shoots have appeared and the damaged limbs removed – hopefully assisting growth.

While cutting back the bramble patch a tiny Fig tree was found, and several other species of tree have been discovered, including Field Maple and Oak saplings. In January we learned that we had been successful in our application for a Woodland Trust Community Tree Pack – a small copse of 30 saplings: Silver Birch, Wild Cherry and Rowan Trees. We hope to take delivery of these in March, and to have planted them by the end of that month.

The Friends have been approached by a local Montessori Pre-School to use the Woodland for ‘Forest School’ activities, and the Head Teacher and some parents have joined us for work parties. ‘Forest School’ is a process whereby children and young people (and even adults!), can gain hands-on learning experiences in a local woodland environment, and this group hopes to start using the woodland twice a week from April.

As you may know (see About Ramsgate Autumn 2012), the present Woodland was previously the site of the Judith Lady Montefiore College, which was demolished in 1961. Apart from a coat of arms, now on the wall of the synagogue, and some lintel stones in the mausoleum, all that remains of the college is the fine flint and red brick boundary wall which runs beside the public footpath.

We are hoping to renovate the wall – possibly with money from the Heritage Lottery Fund – and in this we are fortunate to have the expert help and advice of Robert Holden MICWCI (retd), a craftsman in brick and flint (and, of course, Editor of this magazine). We are also trying to raise funds so that the Woodland can have one of those excellent new Information Boards which the Ramsgate Society has placed elsewhere around the town.

The Friends will continue to support all national butterfly counts and surveys, including Save Our Butterflies Week and the Big Butterfly Count, as and when these dates are announced. There will be a Moth Evening and Bat Walk at the Woodland at 8.00pm on Saturday 10th August, with David Gardner of Butterfly Conservation and Shirley Thompson of the Kent Bat Group. This will be during the period of National Moth Nights. In the Autumn we hope to hold a work party to coincide with the Conservation Volunteers’ Big Green Weekend across the UK and Europe.

Membership of the Friends of Montefiore Woodland is free, and new supporters are always welcome.

All in all we have come a long way, considering we only started as a small group of volunteers in February last year! 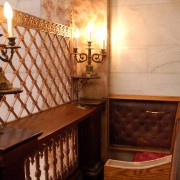 Several members took advantage of February’s private viewing of Montefiore Synagogue and Mausoleum. Our thanks go to Derek for opening, Mark Negin (the artist who created the murals in the Montefiore Medical Centre) for his informative talk on the Synagogue and the lives of Sir Moses and Lady Judith and to Lisa for arranging the event.

Comments I received via e-mail sum the morning up perfectly:

“Just to say it was a lovely and informative visit to the synagogue today. I know we can go on the internet to read about almost everything these days, but I much prefer to listen to a speaker with an interest in a subject, and Mark Negin did a great job. The paintings he did which are on display in East Cliff Practice are lovely, and I was able to tell him this in person today”.

“Very many thanks for the opportunity of visiting the Synagogue and Mausoleum today. I felt very privileged and Mark’s talk was very interesting. Please pass on my thanks to him”.

It was good to have an opportunity to talk with other members of the Friends.

It is hoped we will be able to arrange a second private viewing of the Synagogue and Mausoleum sometime in the future to give other members the opportunity to view this historic site.