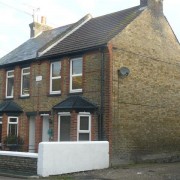 Kathleen Hood read the article in Texas, USA and as a result contacted us with her memories of the area via our website.

Read the full story of her memories……

I live in Fort Worth Texas; however, I was born and raised in Ramsgate, went to school at Clarendon House and came to USA in 1958.   I came across your site in the Ramsgate Society autumn 2012 edition.  My twin sister lived in George VI lodge for several years, her house was part of the stable originally.  I know this area well, my grandparents lived in a semi-detached house,  (cottage) no electricity or bathroom, outside toilet – on Honeysuckle Rd – after walking down the winding lane past the synagogue, just off Hereson Rd.   We moved to Broadstairs in 1942.  The mausoleum always scared me.   The views of the houses are all so familiar – as though I’d been there yesterday.

We went to infant school at Hereson (I know, gone now) for a few months when we lived there at age five, until we moved to Broadstairs.  Honeysuckle Road only has one semi-detached 2-storey house (cottage) on it and I do not remember the number.  Mr. and Mrs. Parker lived on one side, and Nan and Grandad lived on the other.  The Parker’s side has an alleyway alongside it and was used by the trash men, and many of the yards belonging to houses on Hereson backed up on it.  Nan’s house had clearance alongside.  The property was bought some years ago and remodelled.  A long, narrow bedroom was converted to a bathroom.  I believe the outside WC and the inside pantry spaces (complete with mesh door on a meat safe) which were back to back, were incorporated into the kitchen space.  Turn left out their front door and up you head up to the mausoleum.   I have often wondered if the horseshoe is still over the back door.  I have never been inside, but I think my mother was asked in years ago, after all she and 3 brothers grew up there.  Mum and Dad had electricity installed about 1959 I’m guessing.

Our Mum died in 2007 at 91 and I came home in October for probably the last time.  Sadly, my health will no longer allow me to travel because I need 24-hour oxygen, which doesn’t particularly slow me down, but an international flight is something else. What you’re doing as a group so appeals to me and wish I could be there helping.

One of our members found this out which I forwarded to Kathleen in Texas:

I have attached a photo of Winifred villas. The “cottages” your e-mail from America refers to.

The two houses are 11 and 13 Honeysuckle Road and they still have the name Winifred Villas on them.

The Kelly’s Directory, that I have information from, gives the occupants in 1967 as11: William Godfrey Parker and

There was a Winifred Cottage on this site, mentioned in the 1883 Kelly’s Directory.

The current pair of houses were not on the 1907 map. I guess they were built soon after.

I cannot tell you how pleased I am to receive this information and photographs. My grandparents were Albert and Kate (Kathleen) Williamson.  Nan lived there until 1970 – 82, and Grandad until 1976 – 88.   I recall now Winifred Villas – should have mentioned it.  The outside is the same except for the white wash trim and new windows in both houses, and Nan kept a pretty front yard, small as it is.  The iron railings were donated to the war effort as were many others; the gate squeaked alarmingly which I happened to like, and I was mad at Nan when she greased it!  Nan was the halfway point between school and home in Broadstairs and she always just happened to have something to eat because we were always starving.

One charming feature I must mention, the coal cellar was inside the house so the coalman had to lug those cwt. sacks in on his back through the passage into the back ‘parlour’ to dump it.  It must have been the space under the stairs that had been dug out for more depth because there was a step down.  The gas lights, no hot water, tin bath in the kitchen (a small tub on the table for little kids always in fear of sticking to the flypaper………..)  The good old days?  Memories anyway because the last time I stepped in there was in 1958 to say goodbye before starting my travels.

Thank you and your friend for her help, I know more now than when we lived there so long ago.

There were allotments alongside #13, and then a huge, beautiful house that I was told was “The Manse.”   Whether or not it actually was a manse I don’t know and for some reason it was demolished many years ago.  It sat back off Hereson Rd approximately at the same level as The Honeysuckle on the other side.

If you have any memories or stories of the area you wish to share with us, please contact us: montefiorewoodland@gmail.com